• The Americas, EMEA and APAC markets all reported less activity in part due to fewer mergers and acquisitions and fewer large portfolio transactions.

• Following the stock market turbulence at the end of 2018, investors were worried about rising borrowing costs and the prospect of a global economic slowdown. These concerns have diminished going into the second quarter.

• Office, industrial and residential remain the hot sectors for global investment.
The annual growth of global CRE investment in 2018 was revised to 7% from 5% with newly reported transactions.1 Off such a strong base, 2019 registered a weak start. Q1 volume fell by 16% compared to the same period last year.

Q1 declines were recorded in all regions—the Americas (-15%), EMEA (-23%) and APAC (-1%). This likely reflected cyclical concerns about overpricing, a slowdown of the global economy and rising borrowing costs. Most of these concerns have been alleviated since the dovish turns by central banks, although worries about the limited availability of desired assets remain.

CRE investment in the U.S. dropped by 13% year-over-year in Q1 but accounted for more than half of the total global investment volume. Softening in Canada and Latin America contributed to the overall 15% drop in investment volume for the Americas region. Mergers and acquisitions, a major growth driver in 2018, cooled across markets. Excluding entity-level transactions, U.S. investment fell by a lesser 10% rate in Q1, with industrial sales reaching record-high Q1 levels and multifamily keeping strong momentum from last year, receiving 35% of total investment in Q1 (versus 26% in 2014).

Facing stabilized or moderating capital appreciation, investors continued to emphasize rent growth. The strongest growth in Q1 investment volume was in the San Francisco and Seattle office markets, followed by the Phoenix and Boston multifamily markets, where rent growth has outperformed.

Investor and occupier demand for office and industrial assets remained strong overall and improved in secondary EMEA markets, but availability of assets was a major constraint. Compared with Q1 2018, fewer ultra-large transactions amplified the slowdown in Germany, Spain and the U.K. The residential sector fortified its position as the second-largest asset class in terms of transaction volume. Growth is expected to accelerate as investors establish cross-border investment vehicles.

Investment in Asia Pacific had the smallest decrease of 1% from Q1 2018, which was the region’s strongest Q1 on record. Coming off the high notes, Japan (-25%) and Hong Kong (-30%) abated the regional growth. South Korea (11%) and Taiwan (61%) continued to see robust investment growth, partially because volatile and soft stock markets steered domestic investors toward real estate. Meanwhile, China (22%), Australia (78%) and Singapore (21%) restored growth as their economies rebounded and investor sentiment recovered.

CBRE’s outlook on 2019 global investment volume is unchanged for a single-digit drop from 2018’s banner record, with the first half being weak and second half stronger. A better-than-expected U.S. economy, fiscal stimulus in Europe, low interest rates and ample liquidity are all supporting factors of a later uptick in activity, while supply and pricing constraints weigh on the other side, making a year-over-year match unlikely. 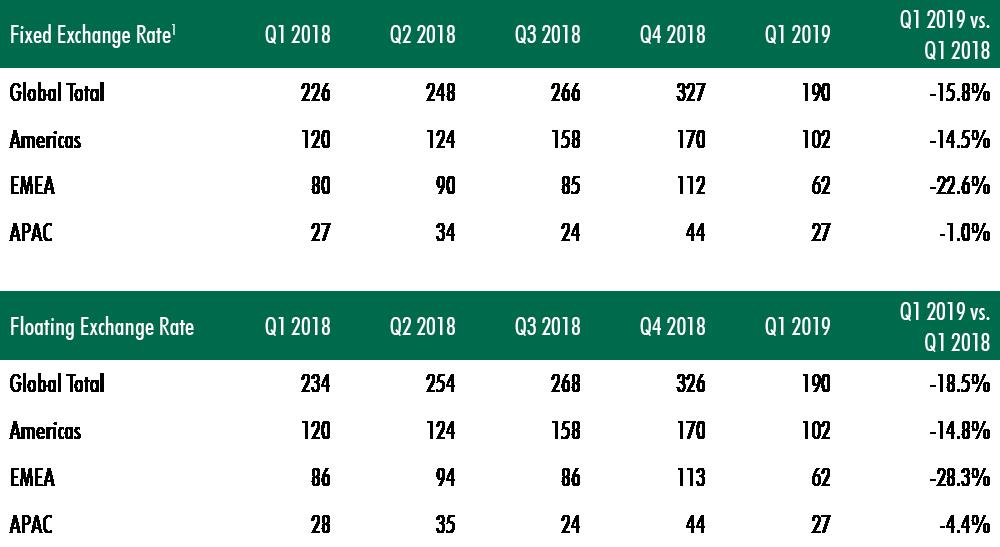 Source: CBRE Research, RCA (Americas), Q1 2019.
1 Measured in fixed US$ unless otherwise stated. Local currency values are converted to US$ using the most recent quarterly FX rates of Q1 2019. This calculation eliminates currency impacts over time and generates the same growth rates as in local currencies.
2 Values include entity-level transactions and exclude development sites.