• EMEA investment activity surged by 19% year-over-year in Q4, with high levels of investment throughout the region.

• In EMEA, Paris emerged as the top destination for foreign capital in 2019. Dublin also gained significant interest from foreign investors.

Total Americas investment volume fell by 6% year-over-year in Q4, while full-year volume fell by 2% to US$569 billion. However, excluding entity-level deals, the U.S. posted its best single-quarter volume in the past decade, increasing 11% year-over-year. Canada and Mexico investment also rebounded nicely in Q4. Softening in the region’s total volume stemmed from an 86% reduction in U.S. entity-level transactions.

The U.S. accounted for nearly half of global CRE investment volume in 2019. Despite constrained global market supply, low global bond yield expectations and falling hedging costs, investors should continue to favor U.S. CRE, as well as fuel a possible recovery of the mergers-and-acquisitions market.

EMEA investment volume grew by 19% year-over-year in Q4, while full-year volume fell by 2% to US$352 billion. Q4 investment activity fell year-over-year in Spain (-44%) and France (-3%) but grew in the U.K. (27%) and Germany (55%). The U.K.’s full-year volume fell by 19%, largely due to prolonged political uncertainty regarding Brexit, while France (12%) and Germany (8%) saw their full-year volumes rise moderately and reach new highs. Other European markets continued to attract capital in 2019 despite historically low prime yields, with Ireland (58%), Sweden (56%), Austria (39%) and Italy (37%) all seeing double-digit full-year growth.

APAC investment volume fell by 27% year-over-year in Q4, while full-year volume fell by 2% to US$131 billion—above the five-year average of US$125 billion. The decline in transaction volume was due to fewer big-ticket transactions than in Q4 2018 and a significant decline in Hong Kong investment volume due to ongoing political turmoil. Hong Kong’s Q4 2019 volume was the lowest quarterly total since the global financial crisis in 2008.

The outbreak of the Wuhan coronavirus poses negative risks to investment sentiment in the region, with Greater China expected to have a slow start in Q1 2020. Investors likely will reduce their pace of investment and wait to determine the full extent of the outbreak. 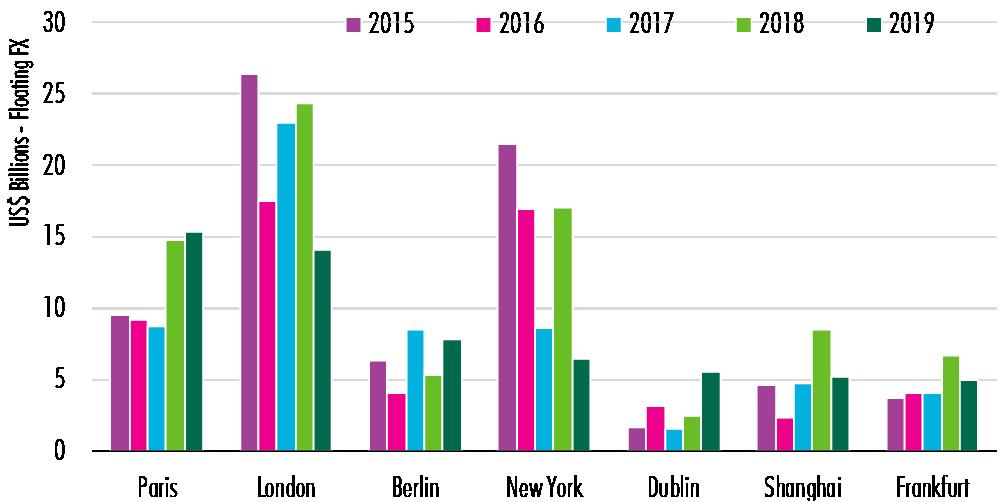 CBRE’s forecast is for a stable investment market in 2020 but with some quarterly volatility along the way. 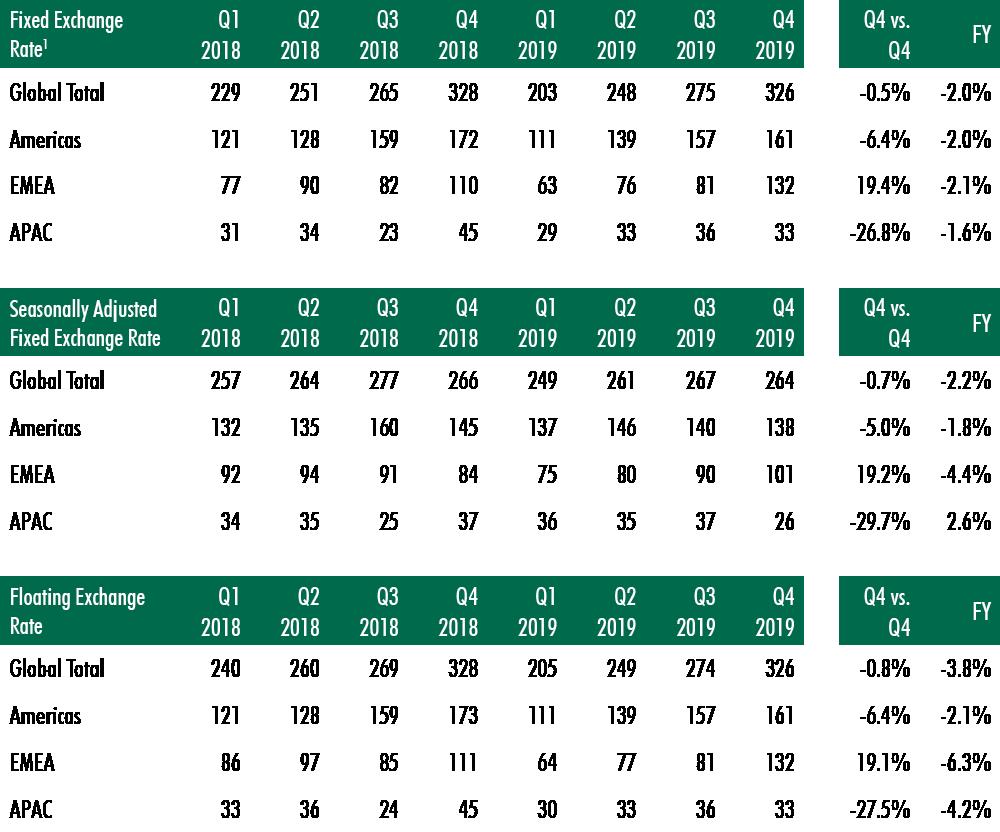 Source: CBRE Research, RCA (Americas), Q4 2019.
1Values are not seasonally adjusted; include entity-level transactions and exclude development sites
2Measured in fixed US$ unless otherwise stated. Local currency values are converted to US$ using the most recent quarterly FX rates of Q4 2019. This calculation eliminates currency impacts over time and generates the same growth rates as in local currencies.

Appendix
The seasonally adjusted figures are shown in Figure A1. These give a more accurate picture of transaction activity from quarter to quarter across any one year.